This was the way I spent my summers more than 50 years ago. (It doesn’t seem that long ago.) Thinning, weeding and watering sugar beets. I posed my cousin Lyn, to the left, pulling up a big weed. I had my brother Allen, in the middle, hacking at a weed with a large weed hanging off his hoe. I had my cousin Craig, doing nothing. I was taking the photo. I tell people that as a photographer, I was outstanding in my field. No body laughs.

My Grandfather, Oliver, seldom spent time in the field with us kids, but he wasn’t above it. At 74 years of age, I think he could out work any two of us kids together. No– taking into consideration the hours he worked, he could out work any five of us kids.
He taught us that if two people were at opposite ends of the field and happened to start on the same row, that when they met, they could just hop over to the next row and keep going. It sounds obvious to us now, but it wasn’t obvious to us then. 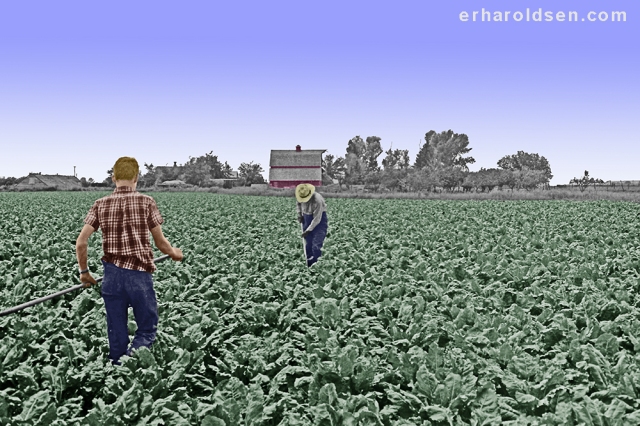 These photos were taken as black and white. I’ve added the color.

A spud cellar is to the left. The barn is center and an irrigation canal we between us and the barn.

Information about Family Life, Family History, Humor, Emergency Response, Disaster Preparation, Latter-day Saint Religion (Mormon) and other stuff that tickles me. Contact me through erharoldsen at yahoo.com. But use the @ symbol. (This helps me avoid spam.)
View all posts by erharoldsen →
This entry was posted in Uncategorized. Bookmark the permalink.